we may be little 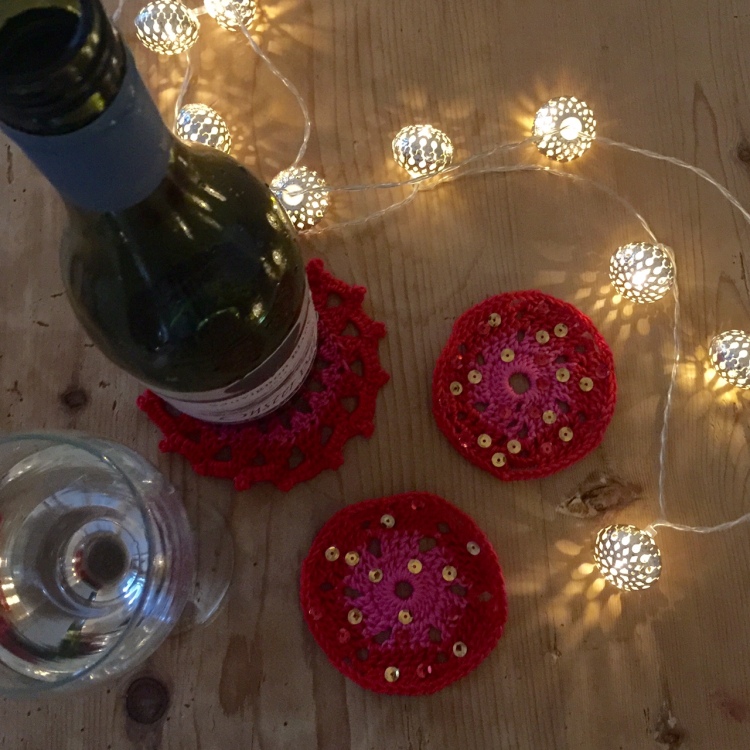 Sparkles! Shimmer! Pink, pink, pink! We love a bit of Strictly Come Dancing. So we decided to get creative in anticipation of its first ep. And if you can’t knock up a set of sequin-clad coasters for the start of Strictly, when can you…

These unashamedly pink and scarlet babies*, with sewn-on gold and red sequins – and a bigger coaster for your bottle – really brightened up our Oyster Bay drinking. Which, as a side note, isn’t actually that hard.

We also like to think our fairy lights resemble tiny mirror balls – but we’re probably just trying to justify ourselves. We love fairy lights as we’re sure you’ll come to notice.

Anyway, on to the couples. Here’s our verdict. Please pardon the puns…

Peter and Janette: Wonder how many episodes it’ll take him to rip off his shirt and ripple his abdominals a la the “Ooo-ooooh-weeee-ooooh Mysterious Girl” vid. We give it three. Maybe even two.

Jamelia and Tristan: Forgone conclusion: those legs, that rhythm – she’s going to be some kind of superstar…

Kellie and Kevin: Ahh, cute. And with potential. Kev from Grimbsy won’t want to let his ‘Never done a dance off’ crown slip.

Carol and Pasha: We forecast the smiley weather woman’s legion of fans will take her at least half-way through the competition, dance prowess or no dance prowess…

Jeremy and Karen: There was a hip swivel. We’re not sure how we felt about it. Wonder how he’ll get on dancing the swing(o-meter).

Jay and Aliona: Jay looks like a kind of hunky human version of Aslan from The Lion, The Witch and The Wardrobe. Whether he’ll roar into the final (…) is anyone’s guess at this nervy stage…

Ainsley and Natalie: He talks the talk but can he walk the swingy-hipped walk? Natalie smiled gamely on. As she does.

Katie and Anton: The Proms host’s dancing partner couldn’t hide his glee. Katie looks a bit like Darcy but whether she has the moves is still up in the air.

Anthony and Otlile: This pairing. Pure. Sex. Appeal. If she can make him dance, there’ll be Strictly fireworks.

Iwan and Ola: Maybe his hips were a bit stiff from a recent run…

Anita and Gleb: If she ever stops objectifying the poor boy we might find out if she can dance.

Helen and Aljaz: Barbie and Ken – in the nicest possible way. And Helen’s limbs look promisingly more fluid than plastic.

Georgia and Giovanni: Aw ‘Georganni’ – destined to be big. Even though they’re small.

Strictly Sunday will be back in three weeks. Until then we’re going to enjoy the last shreds of sunlight and pretend that the Christmas countdown is not on.

* If you like our Strictly coasters you can find them in sets of 4 and 6 in our shop.